The primary focus of this website is on safety. Vaccines’ lack of efficacy is actually much simpler to demonstrate using historical data. There are many facts that support this conclusion. They can be seen via links to other resources in the end of this page.

The oft cited claim, “The science is settled…” is an oxymoron. The scientific method requires continued openness to new data that may alter existing hypotheses. Science is never settled. In theory, nothing can ever be proven without doubt because the possibility of new information always remains.

In other words, the presence of any valid study showing a serious vaccine injury (and there are hundreds of such studies) invalidates the hypothesis that a particular vaccine is completely safe. A graphic summary of some of these studies has been assembled by Children’s Health Defense.

Logic then dictates that it is never possible for any study to prove that a vaccine is safe. Only the continued absence of provable harm assures safety.

The great tragedy of science is the slaying of a beautiful

There is actually considerable evidence that many vaccines are unsafe. Those few vaccine safety studies that have been done involved a small number of people, and were conducted for very short periods of time—often only days or weeks.

The flaw in most of these studies is that they don’t compare the vaccine with an inert control substance. The control used is usually another vaccine or the same adjuvant(s)* as in the vaccine. This can hide many of the negative effects of the vaccine because the same, or a similar harmful adjuvant is in both the control and test doses.

There are unanswered questions about vaccine safety. We need studies on vaccinated populations based on various schedules and doses as well as individual patient susceptibilities that we are continuing to learn about. No one should be threatened by the pursuit of this knowledge. Vaccine policy should be the subject of frank and open debate, with no tolerance for bullying. There are no sides—only people concerned about the wellbeing of our children.

Vaccine safety science has changed little since the 1990s.

Vaccines are designed to train the immune system to recognize and fight off disease-causing microbes. In this process of challenging the immune, particularly the unformed immune system of a newborn, unintended problems can arise. Immune system dysfunctions such to allergies, asthma, and autoimmune diseases don’t appear immediately, but instead arise over long periods of time. Long-term studies to detect these side effects have never been done.

Another aspect is population safety. Whole generations been made dependent on vaccines, with their natural immunity being forfeited. What does the future hold for these highly vaccinated populations who have less immunity (vaccination induced immunity fades) than immunity that is naturally acquired? We don’t know.

Also, vaccine failures are emerging from mutations brought about by the vaccines. One example is pertussis (whooping cough). This failure parallels the over-use of antibiotics, opioids, and antidepressants that have resulted from an overreliance on pharmaceutical medicine.

Vaccination policy is riddled with conflicts of interest. The worldwide vaccine industry drives governments’ vaccination policies in their quest to develop lucrative vaccine markets throughout the world. 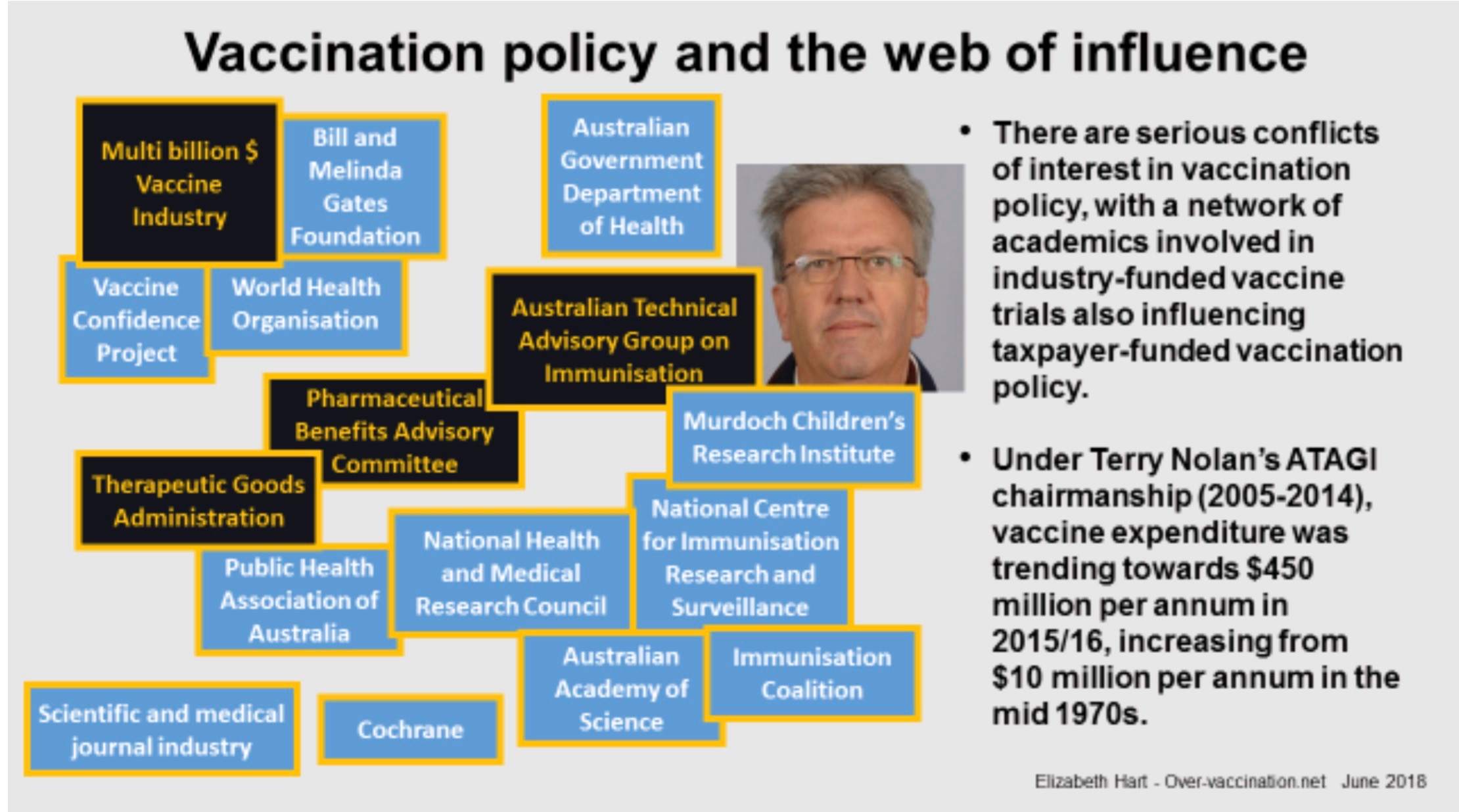 Independent and objective reviews of the burgeoning and conflicted taxpayer-funded vaccination schedule are not being done.

While it is widely assumed that vaccines actually greatly improved the health of humanity, published data don’t support this assertion.

The above paper concludes (unfortunately this paragraph is not included in the free access to the abstract): “Thus vaccination does not account for the impressive declines in mortality seen in the first half of the century. Nearly 90% of the decline in infectious disease mortality among US children occurred before 1940, when few antibiotics or vaccines were available.” (p. 1315)

This graph reveals the same lack of any meaningful change in the downward curves of five diseases—including two for which there are no vaccines—when the vaccines were introduced. 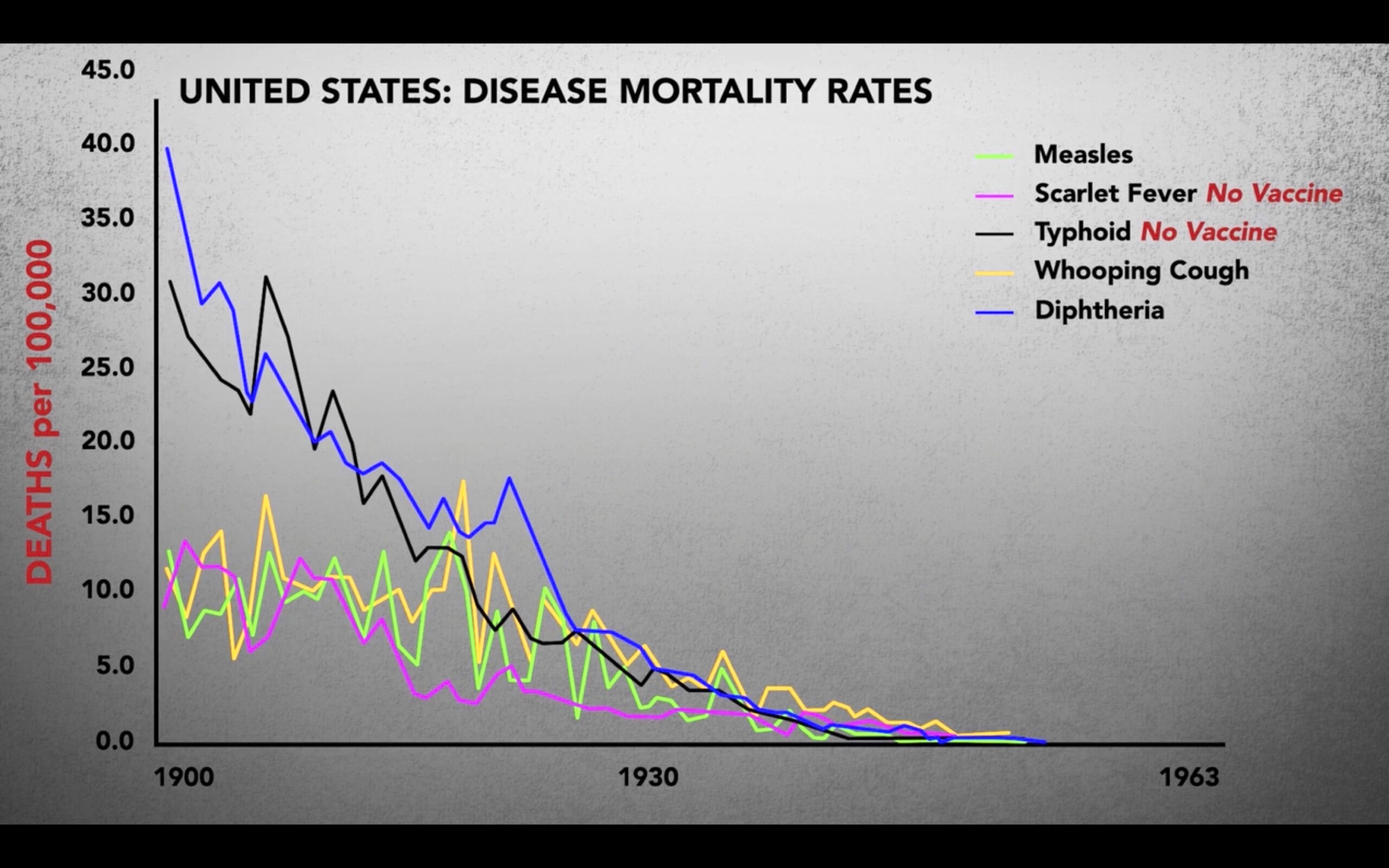 More detailed descriptions showing the lack of any meaningful impact of vaccines on three of these diseases are described here (about half way through the article).

There are several books, most notably, Dissolving Illusions, which provide the details, including 51 detailed graphs that are in the book.

* Adjuvant (from Latin, adjuvare “to help”)
A pharmacological or immunological agent that improves the immune response of a vaccine. Examples are aluminum, embryo cells and various chemicals.