Because many diseases recently added to the CDC’s childhood vaccination schedule aren’t serious threats in modern life, some pediatricians do not recommend the full complement of vaccines be given.

However, many of these same pediatricians, still believe vaccinating against polio and tetanus is crucial.

Paralytic polio was not a serious problem in the US until the 1940s and 50s. At that time a massive spraying of DDT was undertaken due to the mistaken belief that polio was transmitted by mosquitoes (the virus was not isolated until 1954). At the time  DDT was thought to be harmless.

However DDT toxicity actually causes a paralysis similar to that of polio. Because most people have polioviruses in their microbiome with no symptoms, polio is not very virulent. Why the sudden increase and then a drop in polio cases that more closely correlated with the banning of DDT than the introduction of vaccines. Was DDT really the cause?

Before 1954, anyone with short-term paralysis (24 hours) was diagnosed with “polio.”

In 1955, the year the Salk vaccine was introduced, the diagnostic criteria were changed (on p 88). If there was no residual paralysis 60 days after onset, the disease was not considered to be paralytic polio.

The assumption that the poliovirus was the causative agent, rather than DDT, combined with the change in polio diagnostic criteria, seriously calls into question that a vaccine was responsible for the decline in polio cases.

Tetanus is an extremely rare disease that is difficult to contract (see first page of PDF). It was extremely rare even during the First World War, despite countless wounds and the lack of sanitation.

Every year 50 people in the US die of a lightning strike, whereas only 30 people get tetanus. On average, three of them die, and most of them are intravenous drug users, diabetics, and the elderly. 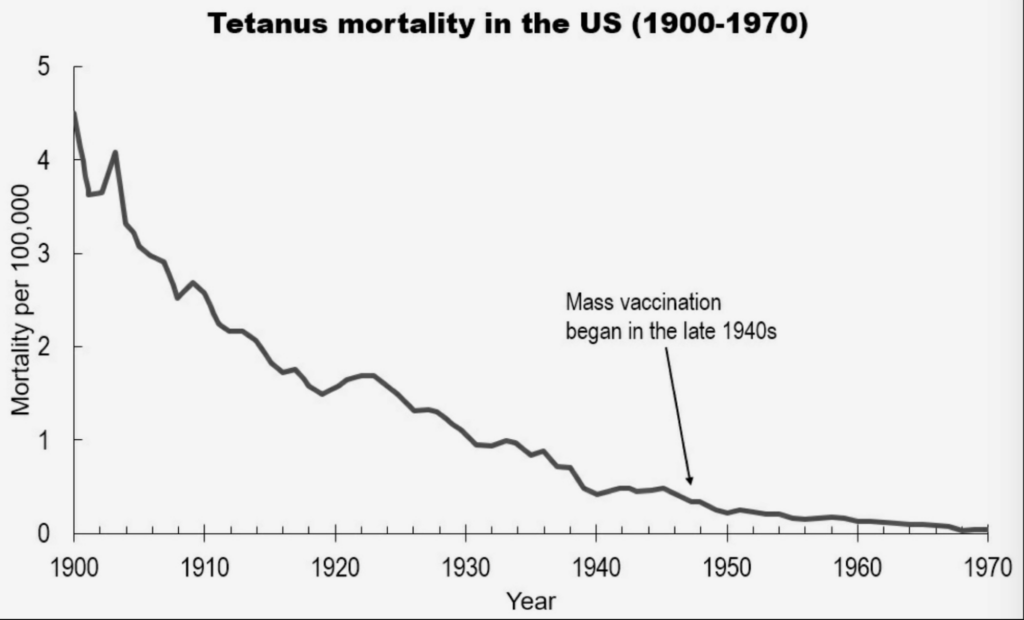 Historical data show that polio and tetanus were not prevented by vaccines, but rather by improvements in sanitation, nutrition, and living standards.